A Night at the Theatre "As You Like It"

I have a full time job in addition to this blogging thing(cause it definetly don't pay the bills) and at that full time job I plan our Wellness program.  This entails exercise classes, outings to theatres, eating establishments, fairs, etc...last night was one of those nights, and why I love what I do.  I got to spend the night at an outdoor theatre watching the Shakespeare play "As You Like It" and I loved it.  The weather was perfect, the bugs were on vacation, and the actors/actresses were so talented.
I grabbed an iced cold skinny mocha to enjoy whilst I enjoyeth the playeth... 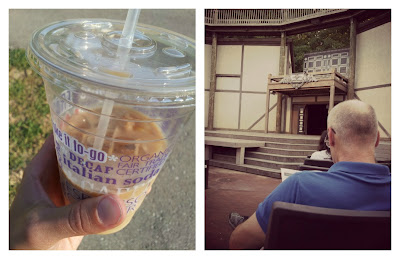 (photo and synopsis courtesy of Riverside Theatre)
In As You Like It, Rosalind, Shakespeare's most breathtaking heroine, and her boyfriend Orlando find themselves in the enchanted Forest of Arden, where “all the world's a stage,” and where sudden infatuation is as confusing as it is beautiful. As You Like It has everything people adore about Shakespearean comedy: mistaken identity, cross-dressing, madness, mayhem, lust, laughter, and of course plenty of romance, both heartbreaking and joyous.

I have to admit, I struggled with the language at first, all that Shakespearean lingo, but did find that after awhile I became more accustomed to it and could follow along.  The woman who played Rosalind was fantastic and the guy featured in the picture singing was phenomenal...the whole cast did a great job and I would recommend this to anyone who is visiting the Iowa City Area.
Labels: orlando play riverside theatre rosalind