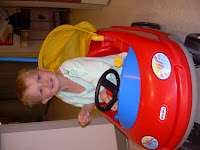 Surgery went great.
Surgery was at 7:45 in the morning so we had to be there at 6. When I went to wake B up at 5:15, I think his exact words were "mom, I sleep, go away" Got there, nurses came in and did their thing, and he was so good. Mercy was great, they had cars for him to drive, toys to play with videos to watch. He was busy, that is for sure. He looks so small in the robe he had to wear. Even though his surgery wasn't life threatening, this had to be one of the single hardest days I have had to go through. To not be there when they took him to the OR ripped my heart out. Every motherly instinct kicked in and I had to hold myself back from just ripping him out of the nurses arms and running out the door. Good thing "my voice of reason" (Kyle) was there. He calms me. 1 hour surgery seemed like 4 but soon we were wisked into the room to meet with the doctor. It was what they thought, bunch of blood vessels clotted. He has done so good since the surgery, running and playing like nothing happened. He is also doing very well with his "cast" He really knows to be careful with it. I am so proud of him. He is such a big boy~ 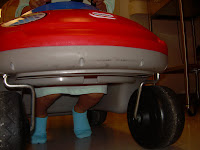 I thought his feet were the cutest in those little blue socks and pushing the car. 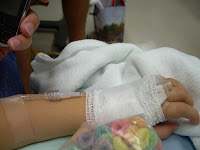 The I.V. after surgery in the recovery room 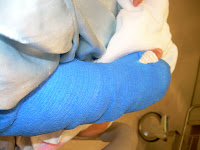 His "cast" that has to be on for a week 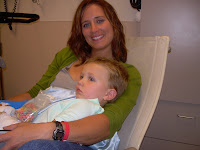 Mom and Bryson in the recovery room 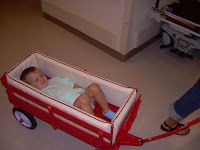 The wagon that took him to the ER
Thank you to everyone who called and sent messages by email, facebook, or text. Your thoughts and prayers were very much appreciated. Thank you to Kalon and the Spratts for the awesome Brownies!
Hopefully heading to the Homecoming parade tonight if it doesn't rain! Take care.